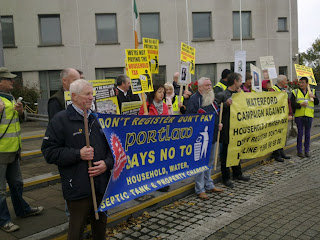 The "back door" is often referred to in the GAA, a second chance to further your prospects in your field so it were, but today it can be used simply to describe the route of access taken to the Dungarvan Civic Offices by two Fianna Fail members who seemed set on ignoring the members of the public protesting the Household Charge at the building's front.

Following a civil and obedient protest outside the Civic Offices, watched over carefully by a Garda van a respectable 50 yds away, the group made the decision to pay a visit to the clinic offices of two sitting T.D's Ciara Conway and John Deasy. Some members entered Ms Conway's office to show how strongly they felt about having these charges imposed on them before returning via The Square after which the protest was ended. 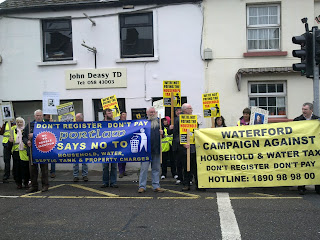 The majority of those present today were from CAHWT groups based in Portlaw and Waterford City, with a Dungarvan contingent who following a meeting last week are in the process of fully establishing a committee. From the support received today from pedestrians and horn tooting drivers they seemingly won't be struggling for support. 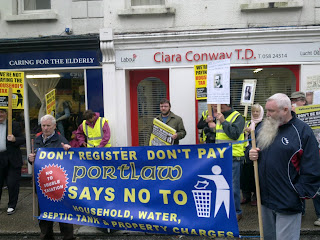 "We want to show the people of Dungarvan who are unhappy with the implementation of these charges they are not alone and hope through positive action we can encourage people within their own communities to establish their own committees to support each other and move forward the campaign." Waterford CAHWT member.
Posted by Dungarvan Diarist