I never knew Thomas Power, the man, the farmer, the father to be, the husband and the man that so tragically passed after having travelled to University Hospital Waterford seeking medical attention. But I know something of his journey, at least until the point he reached where he had hoped to receive the assistance he had hoped for.

I can only imagine our journeys began the same, a bit of doubt in our minds that something just wasn't quite right, an anxious time doubting our self diagnosis before calling it "I'll get it it checked out" though our stories shared one difference, quite simply because of a different day and time that we experienced our symptoms.

Can I firstly say that I do not question the work of any HSE staff involved in any way, i will only put in my own way the events that I experienced and I am very thankful to all of them, and those that have cared for me since, you are the reason I can write this.

February 2017, even looking at the cursor blinking on my screen after this date is like watching my heart beat, all I can say is I felt unwell, many have asked me to describe it I simply cannot, and to be honest I see no good in it, symptoms differ, though that morning I just knew, sensed all was not right, I waited.....and waited........mobile in my hand........at home, alone, stubborn rather than afraid I paced the landing, stairs and hallway.

"I'll send a text" I deduced, not wanting to worry anyone,

Like some message in a bottle cast from the shore of some uncertain island to destination unknown,

"Yeah Right...."  came the reply, that just didn't seem like the truth, a bit out of the blue, unfortunately the person I sent this to was not in Dungarvan as I had thought, they had journeyed to Waterford City 40 odd minutes away........so I continued to pace the hallway, the landing, the stairs and added a bedroom for good measure. Obviously the fact I had asked for Aspirin alerted me to what my symptoms may be alluding to, but somehow my brain did not allow that to sink in, I somehow concluded to remain zen on the matter, all was calm, though by this stage I was racking up some serious mileage around the house, a lot more than if i had just walked to the Doctor's Surgery for some confirmation.

It was almost two hours after my initial fears that the Texted returned "with aspirin" and quickly concluded to put a stop to my pacing and brought me to my GP.

An ECG, and some interesting subject matter later, the Nurse and Doctor left the room and i was alone with my partner. Sticky pads on my chest, attached to wires and beeping technology, my son had only four days earlier turned three years old, three, and all I saw was his face, all I heard was his voice, I felt guilt, was I about to leave him? Back to zen, hold in the tears, no time for self pity, regrets or wallowing, longing and determination set in, my journey was beginning.

A phone call was made, the ECG had shown irregularities, an Ambulance was on it's way to the surgery. It was all becoming surreal, I separated myself from the situation, from the part of myself that was panicking and seeing my past and future collide in one single moment. and became quite relaxed, quite accepting of what was taking place. I don't think I looked at my partner though, that would have been too much, I had to remain stoic.

When the green uniform of the Ambulance Driver appeared, his demeanour was quite jovial and calm, he had experience of this I hadn't, and that strengthened me. As I was wheeled from the room to the Ambulance I remember looking up to him and telling him "No Sirens!" as I had surmised that sirens would make me panic and worsen my situation, at this stage it was around 3 pm on a Friday Afternoon. Little did I know the significance at that time of that piece of information.

I remember as they loaded me, they had asked "Waterford or Cork?" again little did I know! Not wanting to put anyone out who was going to "follow me up" I answered confidently "Sure Waterford will be grand" though for a fleeting moment I saw a doubt flicker in their eyes. They assured me my readings were great and they were sure it was only precautionary, and we headed off with no sirens, a quite serene ambulance considering.

When I reached A&E they took bloods, administered drugs and ran the tests required to determine my condition, at 10 past 5 they returned, I had tested positive for a heart attack. The guy in A&E grew a little agitated as he glanced the clock, I remember he said the cardiologists owed him a favour and he should be able to get me in, I had no idea what this meant, it was like they had a club limited to members only, oh how right I was. "They normally don't take people after 5, they close..." he explained as he rushed about.

5 minutes later I was signing a piece of paper agreeing to a procedure I had no knowledge of, they explained the risks, and well I was not really in a place to question them. I was about to enter the Cath Lab.

I remember the man being wheeled out as I was wheeled in, our eyes met for a brief time, he in his late sixties I guess, being in my mid forties I felt I was gatecrashing. Peaceful classical music played as I entered what I could only really perceive as the set of a medical drama where I had received special access, I almost expected to be offered tea and a biscuit, instead one of the attending staff asked the Cardiologist "Is this overtime or time off in lieu?" More guilt. not only was I fighting for my life I had ruined someones plans for the weekend.

After some time, in a relaxed and calm atmosphere my procedure was finished and a 90% blockage of one of my arteries had been opened with a pci or stenting procedure, and after time in Coronary Care (the single most frightening time of my life, when I had time to think and reflect) I returned home.

Many may share a similar story, certainly more often than not in other parts of Ireland, other than Waterford, where your outcome may depend upon what day and time you may require treatment, rather than the condition itself.  As I have said, I was very lucky, so the circumstances surrounding Thomas Power has a resonance to me and everyone past, present and future who has experienced fears for those loved ones who may have or one day have to call on assistance for Cardiac Care at their local Hospital.

No ambulance driver, paramedic, nurse, cardiologist, should be left having to walk away from a fully functioning unit knowing that lives could be saved if it was manned 24/7, these people are precious and should not be discouraged, pressured or victimized due to the discretion of a governmental budget or oversight.

Of course not every person who makes the Cath Lab will have a successful outcome but all people of Waterford and the South East ask is that we are entitled to that chance, and that Mothers, Fathers, Brothers, Sisters, Wives, Husbands, and Children are not left questioning "Why..... What If......and If Only?"

I wrote this today after seeing the reports on the thousands who marched for our right to a 24/7 Cath Lab in Waterford, and to put forward my commitment to seeing a wrong put right.


Posted by Dungarvan Diarist No comments:

Posted by Dungarvan Diarist No comments: 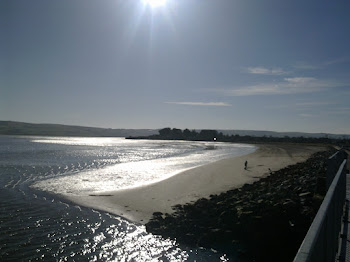 Posted by Dungarvan Diarist No comments:

Documentary I'm guessing from the 1970's, a fascinating look at flora and fauna of the country, watch carefully you might spot some lesser spotted bell bottoms.....

Thanks to Nature Documentary You Tube Channel.
Posted by Dungarvan Diarist No comments: